What is the Softmax function?

In this article, we will review the Softmax function and its role in neural networks. It is typically used in the output layer of a multi-class classification neural network to predict the class label for a given input.

The outline of the article is as follows. We begin by motivating the need for the softmax function in neural networks. We then review some alternatives, like the Linear and Sigmoid functions and vector normalization and why they don’t work for the intended purpose. We then detail the Softmax function and outline some of its properties. Finally, we conclude by relating it to the original goal of multi-class classification.

Motivation: why do we need the Softmax function

The multi-class classification problem entails assigning a class label to a given input among more than 2 possible classes (which is referred to as Binary classification). Machine learning models achieve this by estimating the probabilities for each of the classes being the correct label for the input. The label with the highest probability is then chosen as the prediction. Thus, a deep learning neural network, must also output probabilities for each of the class labels.

The need of a dedicated output layer in neural networks arises because typically, the training process causes the penultimate layer to produce real-valued raw outputs of arbitrary scale. They are not guaranteed to be probabilities and therefore not well-suited for making predictions.

Fig. 1 illustrates these requirements for a 3-class neural network. The input layer, shown in yellow depends on the specific input. There are several hidden layers in green that transform the inputs to output layer, a vector of 3 probability values. The label corresponding to the highest value is the predicted class. The raw output of the penultimate neural network layer is not a valid probability vector. In the case of convolutional neural networks, which are commonly used for image classification, the hidden layers perform convolutions and a dedicated output layer estimates the probabilities. Other neural network architectures also employ a similar output layer.

Alternatives to Softmax function and why they don’t work

Given the above requirements for the activation, we will consider some alternative linear and non-linear activation functions in neural networks and learn why they don’t work for the output layer of multi-class classification neural networks. 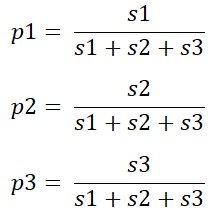 It can be easily verified that normalization ensures that both the above requirements are met. But there are two problems with this function. Firstly, standard normalization is not invariant with respect to constant offsets. In other words, adding a constant c to each of the inputs s1, s2 and s3 changes in the outputs significantly. Consider s1 = 0, s2 = 2 and s3 = 4. This results in p1 = 0, p2 = 1/3 and p3 = 2/3. Let us consider the case when s1, s2 and s3 are scaled by 100: s1 = 0, s2 = 102, and s3 = 104. This could happen due to various reasons, like a scaled version of the input, or the model parameters. The resulting probabilities are p1 = 0, p2 = 0.4951, and p3 = 0.5048. The relative difference between the probabilities reduced proportionally to the constant offset. Secondly, if the input to the node is 0, which is the case for the first node, the output probability is also 0. In certain applications, it may be needed to map a 0 input to a small, but non-0 probability. Note that negative values are problematic with standard normalization.

The softmax activation for the node i is defined as follows.

Each of the k nodes of the softmax layer of the multi-classification neural network will be activated using this function: s_i denotes the weighted average of the inputs to the ith node. All the inputs are passed through the exponential function and then normalized. The function converts the vector of inputs to the output layer of k nodes into a vector of k probabilities. Note that vector of inputs may contain negative values also. 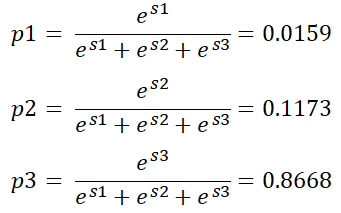 The output values are guaranteed to satisfy the above requirements: the values will be probabilities between 0 and 1. They will also sum to 1 by construction. Being a non-linear function, the resulting probability distribution tends to be skewed toward larger values: s2 and s3 differ by a factor of 2, but the corresponding p2 and p3 are significantly different.

Some Properties of the Softmax Activation Function

This derivative is maximized when p_i is 0.5 and there is maximum uncertainty. If the neural network is highly confident, with p_i being close to 0 or 1, the derivative goes to 0. The interpretation is as follows. If the probability associated with the class i is already very high, then a small change in the input will not significantly alter the probability, thereby making the output value robust to small changes in the input.

Next, we look at the partial derivative function with respect to s_j, the other cross-entries of the input vector.

This derivative is maximized when both p_i and p_j are 0.5. This occurs when all the other labels of the multi-class classification problem have 0 probability and the model is trying to choose between 2 classes. Moreover, the negative sign implies that the confidence in class label i decreases as the weighted input to s_j increases.

Next, we close the loop on the end-goal: multi-class classification using neural networks. The neural network weights are tuned by minimizing a loss function. The softmax activation function enables this process as follows.

Let’s consider the case of 3 classes, as shown in Fig. 1. Instead of labeling the input values categorically as c1, c2 and c3, we use one-hot encoding to assign the labels: class c1 becomes [1,0,0], c2 becomes [0, 1, 0] and c3 becomes [0, 0, 1]. Given that our neural network has an output layer of 3 nodes, these labels translate to the optimal output vectors for the input arrays. An input that belongs to class c3, must produce the expected output vector [0, 0, 1].

Let’s take the example from above, where the softmax-activated output layer produced the output [0.0159, 0.1173, 0.8668] as shown above. The error between the expected and the predicted output vectors is quantified using the cross-entropy loss function and it is used to update the network weights.